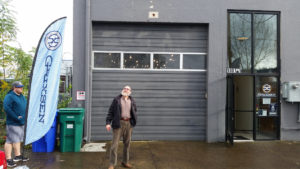 The second brewery we stopped at on Sunday, Nov. 20th 2016 was Grixsen Brewing Company. They are located in SE Portland off of SE Division St. & 10th. Devin, Stan (the not-so-grumpy-stan) and I were not sure what to expect going out to this brewery, as we had not had their beers before and from what we had seen online, they are doing a pretty decent job of making a wide variety of styles.

So, after having lunch at Wayfinder in close-in SE, we drove down to Grixsen (less than 5 min away by car) and found them off of SE Division in an up-in-comming neighborhood. The outside doesn’t look like much, but they do have a couple of rooms you can hang out in, one is the taproom with the bar and tables, the other has a ping-pong table and sofas to hang out in. The production area is back beyond the taproom and is visible from it. The beer list is next to the bar, you can’t miss it.

They have a pretty good lineup of beers available by taster, pint, and growler fill. Be it that we went on a Sunday in the early afternoon, there wasn’t anyone else there and we had the full attention of the bartender. She was super friendly and wanted to explain their brewing processes and their approach to the styles they offered. I’d highly recommend checking them out if you’re in the neighborhood (just a block west from BeerMongers and Apex). She was sure to point out that they are still working on their recipies and wanted to know our feedback on each of the beers. We were happy to provide it to her. I was pleasantly surprised at the amount of attention the bartender provided us.

So, they had eight beers to sample, most of them were one-offs and they really only have a few regular drafts at this time. Overall, the beers were pretty solid with a few really good exceptions being the Fresh Hop Saison and the Scotch Ale. They don’t can/bottle or really distribute that much as they are pretty new, and don’t have an established set of beers yet. I’d imagine that they will be distributed in the Portland area with some interest this year. I’d make the effort to stop by every quarter or few months to see what new beers they have out. The reviews go from left to right as pictured.