Friday Feb. 27th, 2015 three of us went to the southern side of the Portland metro and we stopped at Oregon City Brewing (OCB) that night. None of us had been there before so we used our navigation to get us there, which was quite easy as it’s right off the freeway. Basically they are located in an industrial looking building on the corner of 14th and Washington in downtown Oregon City. You can pull into their large gravel parking lot from either street. We noticed that there was a food cart out front providing pizza during the night we visited. You have to order outside at the cart, the guy next to us had a pie from them and it looked pretty good. The brewing equipment (custom 3 barrel system) is located on the back side of the building, you can peek into the production space when you walk in through some windows).

The main room has a few tables/chairs, window seating, and bar seating. They have 44 draft taps including local ciders, wines, and rootbeer, all available in a few different sizes including taster trays. We ended up doing this with their beers, just ask the server for a sheet to mark your choices with. From what it looked like while we were there, they serve a LOT of tasters, so it’s a good idea to ask the servers if you’re not sure what is what on their digital board (above the bar or view it online here in real time). We were lucky enough to find a couple of seats at the bar, even with it being a Friday night about 5:30pm. It was practically standing room only inside and I can imagine that this place rocks till the wee morning hours on the weekends. 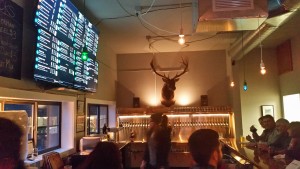 The list of beers they had available was pretty good. I could have spent an hour or two sampling more than just their beers as they had a number of regional beers that I had not had before. We decided to just start with their four which are pictured below with reviews provided. I would have to say that they are doing a good job with the variety and quality of their beers we sampled. The reviews below go from left to right below. 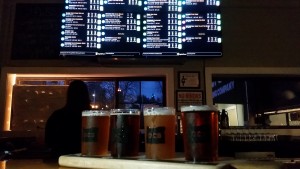